The History of East Lake Park

In 1912 East Lake was initially built as a water reservoir for Osceola.  It was built with horse and mule teams and held 13 acres of water.  Around the mid-1920s, the demand for municipal water far exceeded East Lake’s water capacity. The lake was pumped dry, so West Lake was built.  Moving forward, East Lake became a reserve water supply in case of drought.  In 1936 a drought caused a severe water shortage in Osceola. Water was pumped through Williams Brothers Pipeline from Kansas City to Osceola and put in East Lake as an emergency water supply. During this time, city leaders divided East Lake into two parts from the 1920s to 1975.  The northern ¾ was grazed pasture rented to local people resulting in a lack of good shade trees and reduced plant diversity.  Some native grass species did survive, and those gradually made a comeback after the 1970s when grazing ended.  The southern ¼ was maintained on-and-off as a park by various interests for varying lengths of time.  The Osceola Lions, the Osceola Volunteer Fire Department, and the Street Department all managed the park. During this time, the park’s southwest corner operated as a min-landfill for junk. When Osceola provided the park with good maintenance, the lake had a beach on the southwest side; later, a pool was dug below the dam and filled with piped-in lake water. Many older residents remember taking swimming lessons at East Lake. Also, during this time, the original dam began to degenerate, and the spillway became dangerous and costly to maintain. There was lots of discussion in the 1960s and early 1970s about the lake’s future as a public park and its’ potential cost.  Real estate agents made informal offers to purchase the park and convert it to housing developments similar to Grade Lake in Osceola.  Efforts of the Osceola Lion’s Club led by Fred Redfern and other citizens voiced opposition to this.

Meanwhile, the Osceola Lion’s Club and others raised private funds for playground equipment. In 1977 the Conservation Board, using RC&D Funds from the Federal government, and matched funds by local county tax dollars, reconstructed the dam for safety.  It did not increase the lake’s size, and the project resulted in the removal of all plumbing from the dam.  In December 1978, the Clarke County Conservation Board (CCCB) hired their first full-time employee, Director John Klein.  Having a supervisor, the CCCB then utilized employment programs and job training grants to secure maintenance staff for the park’s development.

The start of the routine maintenance and protection program of the park began. In 1979 construction started on a playground and a new restroom building. The first annual Folk Arts in the Forest festival occurred in the same year. In 1980 the Osceola Lion’s Club built the Goeldner Shelter. CCCB made a group camping area and many small park improvements, such as a road along the west shore. CCCB constructed the park office building and terraces along the east boundary for erosion control during this same year.  Park staff started prairie burning to encourage prairie species grow in the park. Tree planting occurred in several areas around the park. In 1981 the Fisheries biologist poisoned the lake for a fish kill and restocked the lake later that year for better fishing. The Osceola Big Chief Chapter of FFA and the Osceola Lion’s Club built the Big Chief Shelter and the Horseshoe courts. In 1982 the addition to the office building and the volleyball and tetherball courts were completed. During the same year: flower beds were constructed, water fountains installed, large pine trees moved in with a tree spade, and the Osceola Lion’s Club built the overlook tower. In 1983 park staff developed the east side road with the help of a matching Federal grant and the labor from Boy Scout Troop 101. The team added a sand playground area, built the Lion’s Pride Shelter, and water and electricity extended to the east side. In 1984, Glen Davenport’s 4-H Club constructed the Bobcat Den Shelter.

Dry weather allowed clearing of the upper end of the lake resulting in the construction of the suspension bridge and eastside restrooms. In 1985, the Fremont Phoenix 4-H Club built the Mourning Dove Shelter, coinciding with a significant tree-planting effort in the park. Hiking trails were graded and raised to get them out of muddy areas. In 1986 staff added a new roll-in dock with two wings to the east side and small improvements to existing docks and shelter areas.  In 1987 the Redfern Shelter House was completed on the west side. A new dock at the boat ramp was completed, along with the first set of box steps up the dam’s face. That same year, the staff made several safety corrections to all playground equipment while building a concrete sidewalk at Lion’s Pride Shelter for handicapped access. In 1988 additional playground equipment was added with Memorial money while the city of Osceola ripped up the southern part of the park to install a new water line extension east of town. The CCCB installed a new concrete boat ramp into the lake, two box steps on the dam, and one up to Bobcat Shelter. In 1989 CCCB extended water and electricity to Redfern shelter with the additional construction of a wooden playground complex and a new latrine restroom on the west side.

Over the years, new updates have been added or replaced; some of these structures have deteriorated over time.  Block tile restrooms with flush toilets have replaced two of the latrine restrooms in the past few years, and modern playground equipment has replaced many handmade wooden structures. A soccer field was added along with updates to the basketball court, which now has adjustable hoops. Additionally, the dock off of the dam was rebuilt to ensure public safety. All of these projects were completed by local Boy Scouts earning their Eagle Scout Badge.

In 2019 CCCB built a campground with 25 campsites with full electrical and water hookups for RV camping on the east side of East Lake. Additionally, construction completed on a one-mile trail connecting East Elementary and East Lake Park, allowing students and the public to walk from town to East Lake.  Construction was completed on an amphitheater on the north side of Redfern Shelter as an Eagle Scout project. This amphitheater is for concerts, weddings, and educational programs in the park. The Clarke County Conservation Board would like to thank everyone who impacted developing East Lake Park. We strive to keep East Lake a place for all to treasure while keeping everyone safe for generations to come! 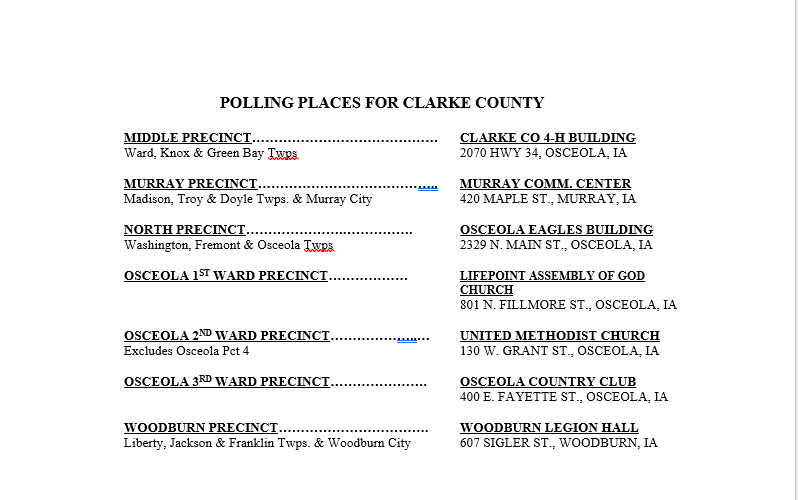